How Did You Get the Idea for WhisperRoom?

This month, WhisperRoom™ is celebrating 30 years of excellence. We had a chat with our company’s President, Ben White, to hear how he got the idea for the world’s first acoustic booth. You have to read the story!

So, where did the idea come from?

“I used to go to a place called Clyde’s restaurant up in Columbia Maryland. That’s where I used to eat a lot of my meals and I liked a lot of people there. I was taking classes at the University of Maryland at the time and I would sit there and do my studying and drink some beers. One day I went outside, and I laid down under this tree and I was just taking a nap. I woke up when I heard this beautiful music. I finally rolled over and it wasn’t on the radio or anything, it was some teenage kid down by the lake playing his alto saxophone. I thought, “God that sounds pretty”.

I was about 30-years old at the time and thought “I could do that”, “I’m single”, “I can afford it”. So, I went out the next day and rented a saxophone and signed up for lessons. Back then I was living in a condominium and had people living on both sides, above me, and below me; it was a middle unit.

I used to go to all the places around, down in Georgetown and Baltimore to listen to jazz. I went to Blues Alley many times and all the hotspots; anywhere there was a saxophone player. I really got into it. I was practicing like 4 to 6 hours a day sometimes.

After driving all the way down to Baltimore or DC to hear some music, I’d come home at maybe 3 o’clock in the morning and pick up my saxophone and I’d want to play it so badly – but I couldn’t. I’d just sit there and go through the fingerings and you know, puff on it a little bit here and there, but I couldn’t play it because it was too late and the neighbors wouldn’t appreciate that.

At that time, I was working a rotating shift as a Software Engineer. Some days I would work nights and I was off during the day. So, during the day, I would practice, thinking that most of the people were at work and I could play a little bit more. I used to even go out on my patio deck to sit in the sun, drink an Irish coffee, and play my saxophone. At that time, I wasn’t any good. I was just going through the basic scales, practicing my long tones, and stuff like that. That went on for a while and then I realized that I need a place to play. Where am I gonna go to play and practice? So, I was making the best of it.

One day I walked into Clyde’s and there was this woman sitting at the bar. I went over and sat next to her and we started talking. During the conversation, I asked her, “well where do you live?”. She said the Pines Condominium Complex and I said, “that’s where I live!”. She said, “no kidding!”.

We started laughing and she says, “Have you ever heard that idiot that plays that saxophone on his back-patio deck?”. I just started cracking up laughing and she asks what I’m laughing at. I said, “that’s me…”. That’s when I realized that I’ve really got to do something. Needless to say, I never talked to that girl again.

A week or so after that, I was driving home to visit family and thought “I’m either going to have to move into a house somewhere where I have privacy to practice my saxophone or I’ve got to build something that I can get in and play”. I thought it through and decided that I was gonna build something.

You know, that’s not a bad idea…

When I got back to Maryland, I went to Heckengers (it was like a local Lowes or Home Depot) and I drew up a design. It was like a box, a big 5’x5′-foot black box. I looked at the materials they had and everything, then I built this big room out of plywood and I put carpet on the outside of it and I designed a ventilation system for the rear of it that was baffled so the sound wouldn’t get out. I had these two big 20″ fans on the back, one pushing and pulling air. I had this big 4’x4′ window in it, and I used to have all my stereo equipment straight across the room so I could use remotes. I would get in there late at night when I’d come back from Georgetown or something and I’d record myself. I’d play it back, then record myself, then play it back. I could do all of that through the window with the remotes.

All my friends and everyone who would come over would say, “You know, that’s not a bad idea. That’s a good idea! Too bad there’s not something like that on the market”. So, I checked into it and there wasn’t anything like that on the market. After a while, I thought, “well maybe if I needed it, a lot of other people needed it”. I was thinking about musicians. Somebody who wanted to play their musical instrument, or sing, or something like that. So, I got in touch with an acoustical engineer and I bought some books and started learning about acoustical engineering. You know, the type of glass to use, the wood that works better, what gets the best STC ratings, and all of that. After getting my thoughts together I designed a room. The original one that was patented. Everything was elaborate on it.

I built one for myself, a 4’x4′ room (which we still have at the plant down in Morristown). I put ceiling acoustic tiles in it, three of them per wall. Behind that, it had multiple layers of material. It had plywood, Rockwool, loaded flexible vinyl, a 1/4″ of hardboard, then it had an air buffer, and then the acoustical tiles. It was multiple layers and it worked great. I could get in there and play at three or four in the morning and nobody was ever bothered by it.

So I drew it all up, hired a patent lawyer, and filed for a patent on it. I went ahead and took a year’s leave of absence as a Software Engineer. That freed me up to dedicate my time towards designing and developing the WhisperRoom and getting the patent squared away.”

From its humble beginning in 1990, WhisperRoom has grown into the world’s premier supplier of modular sound isolation booths. We have helped several thousand professional musicians, voice actors, broadcasters, audiologists, podcasters, and others achieve privacy to sharpen their craft. Take a look at these old photos from the early years of our company. 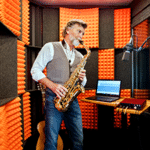